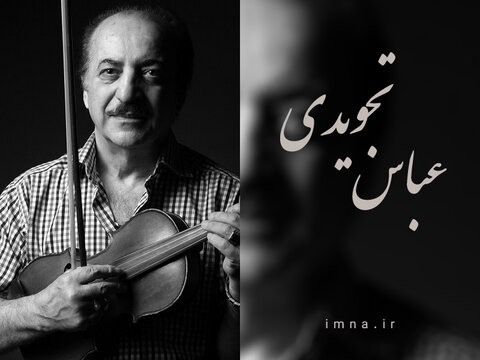 He was born on September 10, 1931 in an artist family in Pamanar neighborhood, Gozar Agha Seyed Nasreddin (Seyed Nasreddin, Pachnar Bazaar) in Tehran. He is the niece of Ahmad Qadakchian (a veteran actor in Iranian theater, cinema and television) and the cousin of Fereydoun Jork (director, screenwriter, producer).

Abbas started learning the dulcimer at the age of 7, and at the age of 11 he started learning the violin with Professor Abolhassan Saba. Abbas Tajvidi entered the University of Tehran after high school and studied Persian history and literature. After receiving a master’s degree from the university, he entered the Tehran Gendarmerie to serve in the military as a second lieutenant officer, who was also the conductor of the Tehran Gendarmerie Orchestra at the same time.

After spending the above period, Tajvidi entered the national television of Iran and took over the management of the children’s television group of the television, which after a while was transferred to the radio and was retained in this position by Davood Pirnia. He also worked as a violin soloist in the Chamber Orchestra led by Zhura Mikhailian; Other instruments that Abbas Tajvidi plays are oud, tar, setar and santur.

Son of Abbas Tajvidi
Abbas Tajvidi has a son named Alireza, who is a pop singer and producer.

Abbas Tajvidi and Shabahang Company
Abbas Tajvidi is the founder of Shabahang Broadcasting Company or the current Ava Shabahang Cultural and Artistic Institute. This company was established in 1350 with the aim of improving the quality of music and establishing a music recording studio and playing musical works, and since 1975, it has been broadcasting works by singers. Shabahang After the Islamic Revolution, the company was silent and in 1995, the company changed its use to the Cultural and Artistic Institute with the aim of creating new educational and research platforms.

Abbas Tajvidi, a violinist, oud, tar, setar and santour player and the founder of Shabahang Broadcasting Company, was born on September 10, 1961.According to Imena, Abbas Tajvidi is a violinist and many traditional instruments who started learning the instrument at the age of seven and received a first-class artistic award and a first-class permanent membership. He has a master’s degree in Persian history and literature from the University of Tehran, has collaborated with many artists and has worked in television and radio.